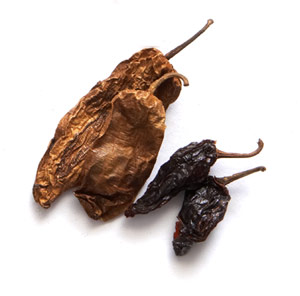 Chipotle chili peppers are smoked and dried jalapeño peppers that come from Mexico. They have an amazing deep smoked and spicy flavour that goes amazingly well in sauces, salsas, beans and anything Mexican.

Having spent a year and a half working as a chef in the United States I grew to love chipotle peppers. In the US they aren’t anything gourmet and feature regularly at even the local fast food joint. However, in Australia I had never even heard of them and you rarely see them anywhere.

I recently visited Casa Iberica at 25 Johnston St, Fitzroy and was very excited to find both dried and canned chipotle peppers. They are suppliers of all things Spanish, Portuguese and South American. The dried chipotles were about $6 for a smallish bag but they should go quite a long way. They were surprisingly un-spicy but the flavour is delicious.

I also found a link to Aztec Mexican which seems to sell chipotles as well. They may only be wholesale though and they are way out in Tullamarine.