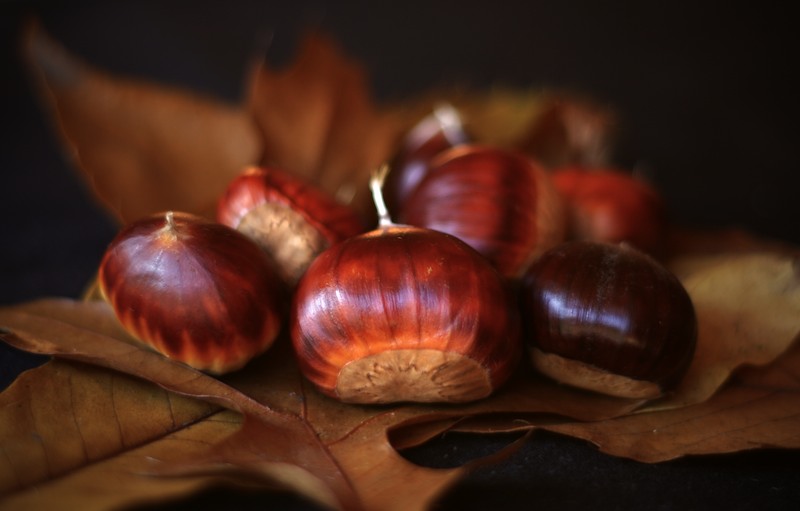 Chestnuts are a rare and largely unused nut in Australia. Growing up in the Dandenong Ranges I was surrounded by Australian gum trees as well as many European trees such as chestnuts and oaks. When I was a child I used to wander around the neighbourhood and collect chestnuts from the numerous chestnut trees. I then set up stall on the side of the road and sold them to passers-by, quite often Greeks and Italians in search of the elusive nut. They got a good price and bargained hard!

This year I have been watching the leaves change and the chestnuts ripen with much anticipation. At last they were ready and Shakti and I went on a chestnut hunt and collected these beauties.

Unlike other nuts they have a much lower fat and protein content and instead are much more starchy. They have a delicate sweet and earthy flavour and are somewhat similar in consistency to a potato but with much more texture.

Make sure you put a slit in them with a knife before roasting otherwise they will explode. The simplest way to have them is to roast them in some coals on an open fire or an oven for a few minutes until the slit opens up and a knife slides easily through the nut. Serve hot with butter, salt and pepper.

They are also great in stuffing and sautéed with leeks. I imagine their flavour would go deliciously with mushrooms and I am looking forward to trying them together. They were very popular in France, called marron we saw them featured in gelati, crepes and with chocolate. In Italy I have heard they even make gnocchi out of chestnuts!

One way I cooked them recently was in a Blue Cheese and Chestnut Omelette.