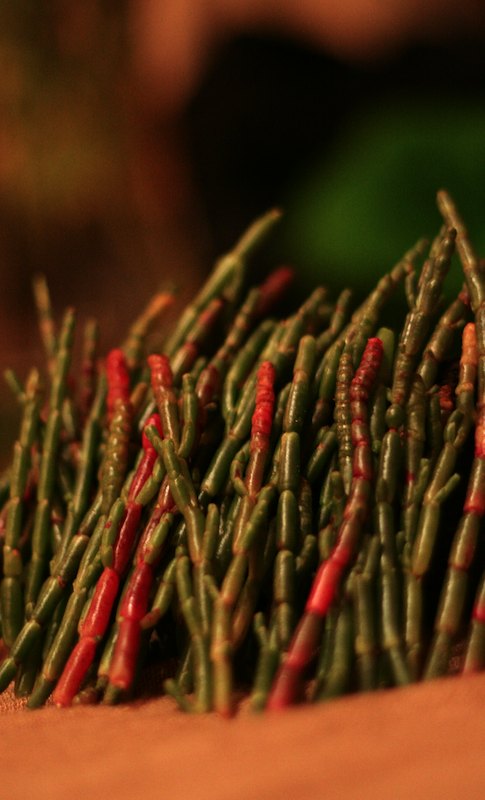 I first discovered this curious and intriguing vegetable in France when a good friend of ours took us to a garden that grew rare heirloom vegetables and fruits.  Since then I had been on the look out for it, eager to try cooking it myself.  On a trip down to Anglesea I found it growing prolifically in the shrub behind the coast.  It is a ground creeper that grows no more that a foot high in open patches of coastal bush.  It is naturally a very salty vegetable, more so than anything I have encountered before.  And the ones that I found at Anglesea had a tough woody spine at its centre, although I don’t remember this being the case with the ones that I tried in France.

To prepare it, boil in water for a few minutes. Strain and ice, then mix it with plenty of lemon juice and some finely chopped garlic.  There is no need to add salt at any point, naturally it has plenty and you are likely to make it far too salty if you do so.  Leave the Samphire to pickle for a least a few hours.  It could be served as part of a cheese plate or tapas platter for an entrée to a meal.

I can’t say that I am a huge fan of Samphire.  With its woody spine it is some what laborious to eat.  But it certainly will spike up interest and curiosity amongst guests at a dinner party for it is unlikely that any of them would have heard or tried it before.  If you are an adventurous and curious cook then you must keep your eyes out for it as it is right up your alley…

This entry was tagged Samphire, Wild Food. Bookmark the permalink.

One Response to Wild Samphire