The environmental impact of factory farming

At least in Australia cows for both dairy and meat are usually pasture fed and live a nice life outdoors. Although their feed may be supplemented with grains I doubt it approaches anywhere near the proportion of their diet as it does in the US. I don’t exactly know why the intensive practices of the US haven’t spread here. Maybe it is because we have so much land and space. Unfortunately our pigs and chickens are factory farmed exactly the same as in the US.

I am including the summary posted on the helladelicious.com blog as well as some other items I found interesting in the newsletter:

Factory farming began in the 1920s soon after the discovery of vitamins A and D; when these vitamins are added to feed, animals no longer require exercise and sunlight for growth. This allowed large numbers of animals to be raised indoors year-round. The greatest problem that was faced in raising so many animals indoors was the spread of disease, which was combated in the 1940s with the development of antibiotics, added since then to animal feed too. Business found they could increase productivity and reduce the operating costs by using mechanization and assembly-line techniques. www.idausa.org 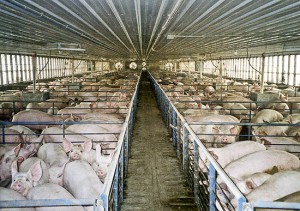 A soaring percentage of the meat and dairy products that are consumed today come from factory farms. Livestock are raised indoors and fed with high-protein animal feed, mostly produced with soy-beans and maize, complemented with vitamins and antibiotics to avoid the spread of disease in the overcrowded industrial facilities. Every day family farms are forced out of their livelihoods while big corporations increase their control of meat production all around the world. From whatever angle we look at factory farming, the outcomes are alarming. This intensive way of producing meat is systematically spoiling the planet, endangering biodiversity, exploiting workers, jeopardizing human and animal health, abusing animals and undermining the survival of rural communities and family farmers. Despite this, the consumption of industrial meat is increasing everywhere, as big corporations invade international markets with meat products at a deceptively low price. Many consumers need to change the way they eat – choosing local products and diminishing the amount of meat in their diet. Concurrently we should call on our governments for a radical change in national policies and international agreements, with the inclusion of the right to food sovereignty at all levels. 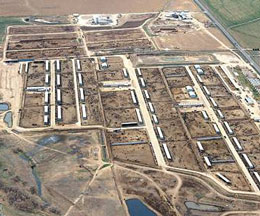 The scale of environmental devastation caused by factory farms is huge and varied. Intensive animal breeding requires ever-growing quantities of water, animal feed, energy and chemical inputs (1). The concentration of thousands of animals creates an unmanageable amount of waste. The manure that is used as organic fertilizer in smaller holdings, becomes a dangerous pollutant. In many pig factory farms for example, the waste is dumped after being mixed with water in lagoons and then sprayed on croplands. This blend contains antibiotics and metals from animal feed (2), which contaminate the air, water and soil. The impact on human health is obvious: the ongoing dioxin crisis in Germany (3), the spread of Salmonella caused by contaminated eggs, the current outbreak of swine flu or of mad cow disease a few years ago are clear examples. Furthermore factory farming contributes largely to global warming – it is responsible for 18% of total greenhouse gas emissions (4)- in particular carbon dioxide, methane and nitrous oxide, which in addition are harmful gases for those living or working close by. The damage of factory farms is wider still if we consider the indirect consequences. To guarantee the fast growing rate of livestock, intensive farms import and use of massive quantities of cheap protein-based animal feeds, mainly produced with soy-beans and maize. Soy monoculture production – especially in Latin America – is one of the main causes of deforestation, loss of important wildlife habitats, intensive use of GMOs seeds and pesticides. Rural communities and indigenous people are evicted from their territories by the agribusiness which produces soy beans.

The Social Impacts of the Meat Business

The corporate takeover of the meat industry is accelerating. In United States for example in 1985 the top four pork-producing companies accounted for 32% of the market; by 1998 they controlled over 56%; and by 2006 that had risen to 63%. Corporations often control the whole process of production – from raising the animals to processing the meat, and distributing the final products. This vertical integration of the meat chain production makes it easier for factory farm corporations to push traditional family farms out of business (5). Moreover as a result of their growing power, big business can lobby to prevent the implementation of regulations to protect human health and the environment from the damages caused by factory farms. In addition, the concentration of the meat industry in the hands of big corporations promotes the alarming reduction of livestock’s genetic diversity and the loss of traditional breeds; for example currently industrial pig production relies on only five breeds. As in agriculture, the trend towards raising single adapted varieties increases the risk of susceptibility to disease and diminishes livestock’s resilience (6). Factory farms are not even a fair and safe place to work. Workers are often exposed to unhealthy conditions: regular inhalation of toxic gases and dust and use of chemical products and physical labours that may cause temporary or permanent traumas (7). Furthermore the employment of undocumented persons and underage workers is commonplace, to the point that Human Rights Watch has described workers’ conditions in many of these industrial facilities as systematic human rights abuses (8).

From North to South, Big Meat is advancing 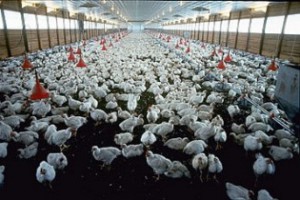 Despite all these negative aspects, intensive meat production is increasing everywhere. As for many other commodities, big corporations from the North have started moving their businesses to poorer countries where they can produce more cheaply. In addition, companies from the South are using their capital to set up new factory farms. A large number of meat companies based in the South have grown into fully-fledged transnationals, with their own aggressive overseas expansion strategies. The global food system is managed by these corporations, and corporate strategies define all investment flows. The role of governments is mostly to help their companies to navigate these markets, whether by signing bilateral trade and investment agreements or by launching diplomatic missions to overturn import restrictions. What all these investment flows amount to is more industrial meat: more factory farms, faster assembly lines and more fast food. The cost to people and the planet is devastating (9).

In the last forty years, the area under soybean cultivation has increased rapidly in the world; Latin America entered strongly in the production of oilseeds starting in the eighties and nineties, quickly occupying the number one position for production and commercialization. In fact, in the last decade, soybean cultivation has continued to soar in Brazil, Argentina, Paraguay and Uruguay: between 2002 and 2008, these countries increased the area devoted to the crop by 20, 50, 80 and 100%, respectively (10).Today, Brazil, Argentina and Paraguay are second, third and fourth countries in terms of soybean production, with China, India and the European Union as its main customers, which acquire soya mainly to prepare animal feed (and secondly as biofuel). In this soybean chain, the main Latin American producers have became subordinate exporters to developed countries, increasing their dependence on them. This development has been to the detriment of traditional crops for feeding the local population, has increased deforestation of native forests and the Amazon jungle, and in all cases, led to the concentration of land in the hands of a few landowners, causing the displacement of peasants and small family farmers. In addition, this has created and accentuated the process of denationalization of land, and reduced employment for rural workers. The increase in soybean cultivation has led to social and environmental impacts, due to the use of GM monocultures, promoted by biotech giants like Monsanto. The soybean crop not only tends to erode the soil, but is combined with biotech packages that include extensive use of highly toxic herbicides such as glyphosate.

The European Machine, An Example

The European Union (EU) currently imports over 75% of its animal feeds. Many of these are used in intensive farms which produce lowquality products – such as meat, milk and eggs. Some is commercialized within Europe and some is dumped on the international market. When creating the European agriculture policy in 1962, the EU made a decision to protect its markets for grain but not for animal feed (cereal substitutes, oil and protein crops) – allowing the big animal feed producers (the United States at the time) to export cheap feeds to Europe. While European feed production decreased, industrialized systems were applied to animal rearing which became very dependent on protein feed imports (mainly soya) from overseas. After a US export embargo on soy in 1973, the EU politicians became aware of this dependency and tried to introduce an oilseeds levy; but it was refused by the USA, the European oilseeds lobby and the GATT (the predecessor of the World Trade Organisation). The growing control of transnationals as soya producers, processors and exporters (now mainly GM soy from South America), as well as the domination of supermarket chains has ensured the continuation of this system – leading to an increasing concentration of meat and egg production around major ports, or in other low-cost areas in Europe – such as Eastern Europe. There is an opportunity in the reform of the Common Agricultural Policy (CAP) in 2013 to put livestock back on the land and give preference to grazing and rotation of leguminous crops on European soils. This means reversing the industrialization and concentration of meat and dairy production – and promoting the number of multi-functional sustainable farms, farmers and farm workers. Food Sovereignty offers these solutions – and can bring European livestock farming back into balance. For more info contact the European Coordination Via Campesina – www.eurovia.org

Integrated small farms, which breed local livestock, are much more efficient, healthi- er and better for the environment. Cattle, sheep and other ruminants have the unique capacity to turn pasture into proteins for human consumption, as milk and meat. Farmers also use the manure to make  healthier, living soils*. The negative contribution to global warming associated with meat production is mainly caused by the fertilisers used in the vast monoculture plantations for industrial animal feed, as soy-beans for example. On the contrary through sustainable pas- ture management carbon is stored as humus in the soil and contributes to its fertility. Each ton of humus in the soil captures about 1.8 tons of carbon diox- ide from the atmosphere**. Additionally traditional family farms guarantee the endurance of local breeds, conserving biodiversity and reducing the risk of disease transmission.

Meat production to feed or to starve?

From Ole-Jacob Christensen, a farmer in Norway. Humans have cultivated land for 10,000 years – almost as long as that we have bred animals for our pleasure, for their traction strength, or for their most important function – to feed us. Ruminants transform grass and scrub into meat, milk and manure. On our small mountain farm in Norway, our dairy cows go out into the forest or mountain every morning during the summer period, and return in  the evening with full belly and udders. This allows us to grow other things (such as hay, vegetables, potatoes, fruits etc..) on the arable land. Modern farming has turned this principle upside down, and feeds animals with food that could feed people di-rectly. The rate of concentrates (grains and soy) in the diet of an average cow now exceeds 40% of the total amount. Pigs and poultry bred in factory farms eat nothing but that; even salmon farming uses 3 to 4 kilograms of sea fish to produce one kilo-gram of salmon. 40% of cereals and 75% of soybean farmed today is processed as industrial animal feed. In this way, they lose between 60 and 80% of their nutritional value.  Modern farming does not feed people, it starves them.